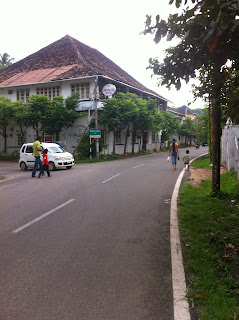 This is about the maximum traffic we saw around in the inner bylanes of Fort Kochi during our two day stay!

Fort Kochi, the tourist hotspot of Cochin is full of old English and Portugese bungalows, most of them now
converted to Homestays or Inns. The quaint streets, void of any of the hustle-bustle that accompany touristy places are a pleasure to walk on and hide an assortment of boutique hotels, pubs and exotic stores selling everything from spices to antique jewellery and handicrafts to designer clothes.
Fort Kochi is also the hub of the tourist circuit, boasting of most of the tourist attractions including Chinese Fishing nets, the Dutch Palace (in neighbouring Mattancherry), the Jewish synagogue, the St Francis Church and the Dutch Cemetry.

About 100 metres from our hotel, was the Fort Kochi beach. The beach is not as clean as some of the other beaches around Cochin, with long strings of weeds washed onto the shore by the currents and rowdy crows (which seemed to be a common feature across Kerala).
However, it is one of the social hotspots of Fort Kochi. On the Sunday morning that we first visited it, there were numerous teams of young people playing football on the beach, oblivious to the slush and weeds and visibly enjoying the animated looks of tourists like us.
One of the discerning features of this beach (and again, probably other beaches around Cochin) is the insane quantities of shells that are washed onto the shores by the water.  You would think that the beach is made up of equal quantities of sand and shells :). And this spawns a huge number of shell-collectors. The shell collectors, work meticulously and with intense concentration picking out shells that are either intact (the possibility of finding an edible mollusc inside are higher) or are the kind that can be used in making souvenirs or accessories. 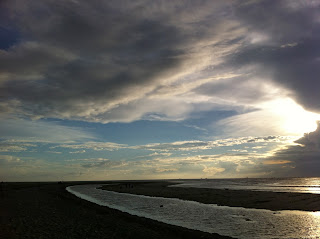 A quiet evening at the Fort Kochi beach

And for us, the Fort Kochi beach offered a beach that was wide enough for Aadi to play with his "Park and Beach set" without getting hit by a stray football, long enough to walk without tiring and close enough to treat like our backyard!
Posted by Pradeep Roonwal on Friday, October 25, 2013